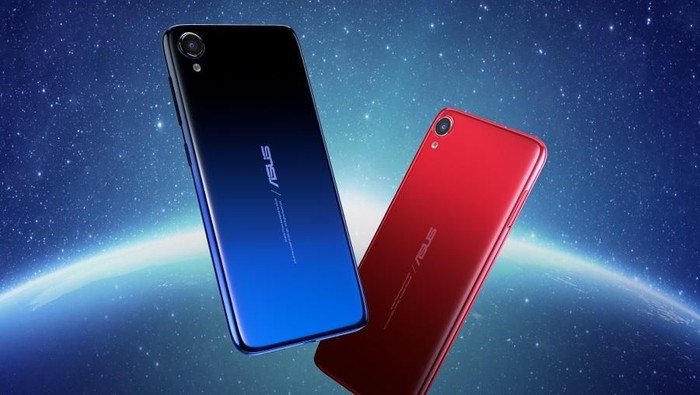 Priced at Rp1,199,000 Asus Zenfone Live L2 invites my attention. Because the smartphone is worth a million has a pretty attractive appearance unlike a smartphone priced at a million.

This charming display ZenFone Live L2 comes with a new body design that I hold using the Cosmic Blue display which is said to be inspired by space.

When compared to previous series, Zenfone Live L2 appear more stylish. This new look presents a beautiful color gradation that according to Asus presents a cosmic feel and a mysterious universe.

ZenFone Live L2 comes with a 5.5-inch (18: 9) full-view screen and has a screen-to-body ratio of up to 82%. Which means the Zenfone Live L2 screen is also bigger than the previous series.

The Zenfone Live L2 screen displays content with a brightness level of up to 400 nits for a more cinematic viewing experience.

For functionality, Asus puts the buttons that are quite simple on this device. On the right side there is a power button and volume rocker. While on the left side there are only slots for two SIM cards that support the dual standby feature, as well as one MicroSD memory card.

ZenFone Live L2 even supports the use of MicroSD memory cards with a capacity of up to 2TB, allowing users to store their favorite videos, photos, music and content more freely.

In this series Asus not only offers a different design from the previous series. Asus also presents an increase in terms of performance and battery using the latest technology.

The battery which is carried by Zenfone Live L2 has a capacity of 3,000mAh which is able to make this smartphone last for 28 hours if used to make phone calls on 3G networks.

With this battery capacity, ZenFone Live L2 can also be used to play up to 8 movies, play music without interruption for 4 days, and have a standby time on the 4G network up to 28 days.

Better battery life can also be presented thanks to the use of the Qualcomm Snapdragon 430 mobile processor embedded in this smartphone.

As is known, the Qualcomm Snapdragon 430 mobile processor has better performance than the Snapdragon 425 used in the previous ZenFone Live series.

Asus Zenfone Live L2 is equipped with 2GB of RAM and 16GB of internal storage space.

To be used for playing games, the performance of Zenfone Live L2 is quite capable of playing PUBG games with medium graphics. For smartphones in its class this graphic is fairly good.

In the top bar there is only a hole for the audio jack. While on the bottom bar there is a micro USB slt and speaker hole.

Another feature is Video Trimmer & Collage. This feature allows ZenFone Live L2 users to trim and combine video clips easily without the need for third-party applications.

This feature makes it easy for users to be creative with video clips they have and then share them on social media.
Camera

Asus ZenFone Live L2 carries the main camera with a 13MP sensor that is equipped with LED flashlight for shooting needs in dark conditions. The main camera uses a lens with aperture (apperture) F2.0 for better photo results.

While the front camera carries a 5MP sensor with F2.4 opening. The front camera is also supported by Softlight Flashlight so that smartphone users can still take selfies even in dark conditions.